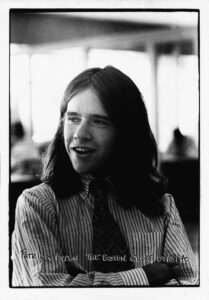 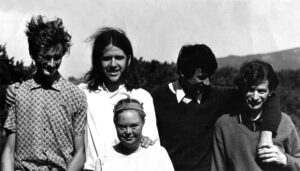 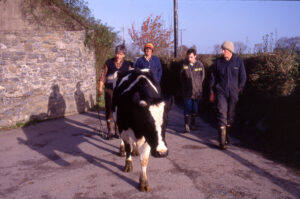 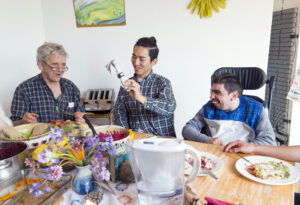 Patrick Lydon is a rare bird. A ‘social artist’, his raw materials are human relations. He is a man of vision, intelligence, principle, discipline, huge energy, passion, courage, humour and, most obvious of all, he’s bursting with love for his fellow man, especially the more vulnerable amongst us.

An idealistic intellectual growing up in a high-achieving family in Boston in the 1960s and fuelled by rock ‘n roll, he was destined for a career in rock journalism. By 19 he had reported for the New York Times on The Rolling Stones in Hyde Park and on Woodstock. But a deeper disenchantment with American culture, and then a call to arms in Vietnam, took him instead to Ireland, where his discovery of the Camphill Movement, and with it the love of Gladys Kinghorn, changed his destiny, gave him his vocation and made him the legend he became.

Camphill saw people with and without disability as of equal spiritual integrity, equal in respect and citizenship. They lived a radical form of community life-sharing, guided by the teachings of Rudolf Steiner, with particular emphasis on the potential, education, integration and integrity of all, regardless of ability. Their communities were based in largely self- sustaining, organic farms and gardens. Nobody was paid. People coming to live there found their lives enriched. ‘Cared for’, ‘carers’ and ‘service provision’ were alien concepts. All contributed according to ability. Many people spent their entire lives in Camphill communities.

In the fifty years since Patrick met Gladys in Camphill, they have been at the heart of that movement in Ireland, in the establishment of over eighteen residential communities and social initiatives, including a concert hall, a café, a biogas energy plant, social farming & gardening, social housing and town planning initiatives, an impending inclusive neighbourhood and an arts centre, KCAT, in Callan, Co. Kilkenny, now a busy international hub of creative endeavour.

In 2021, just as Patrick is collaborating with his friend, the filmmaker Éamon Little, on a work to mark Camphill’s fifty years in the Republic of Ireland, he is diagnosed with Motor Neurone Disease.

Born That Way documents Patrick’s final year, in which he looks back on a fascinating life, lays the ground for posthumous, ‘green-shoot’ projects and prepares for death. It will be an unflinching journey to the end of an exemplary life, probing ‘otherness’ in our society and asking searching questions about the future we want to create.

In Development with Screen Ireland.