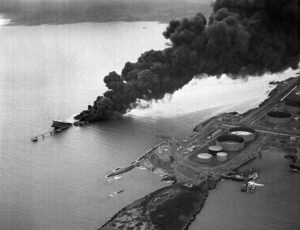 Forty-two years after Ireland’s worst maritime disaster, the memories of the Betelgeuse inferno on Whiddy Island still haunt many of those who came across the scene they describe as ‘hell’. Firemen, nurses, gardai, fishermen, priests, Gulf Oil employees, wives and families – each with their own truth for what happened that night. In the weeks, months and years since, with tribunals of enquiry and accusations and whispers of lies, betrayal, cover-up, combined with trauma and grief; some people feel it’s time to talk openly about the events of that unforgettable time.

Through the testimonies of people from West Cork and France, whose lives were permanently marked by the nightmare events of those dark days, this creative feature documentary will attempt to tell, and then re-tell, and re-tell again, the complex stories of how this enormous catastrophe unfolded. The Inferno was a tragic catalyst for a volatile relationship between Gulf Oil and this small West Cork community.

The development for this film began in early 2019 with research conversations with people involved like Michael Kingston, who was a young boy in 1979 when he lost his father Tim to the disaster. Michael is also the representative for many of the French families. Over the last two years we have met with numerous people connected to the night and we began filming properly in August 2020 with Michael, his sister and his wonderful mother Mary. We also filmed at the jetty with firemen who were there that dreadful night. We have filmed with a local GP, hotel owner, gulf employees, Whiddy Islanders, family members and others, all with their own unique story. Many still looking for answers. In Autumn 2021 we travel to Brittany to do initial filming with some of the French families.

Producer, Adrian McCarthy’s father, Donal, was one of the firemen at Whiddy that night. This is personal.

In Development with Screen Ireland and RTÉ.